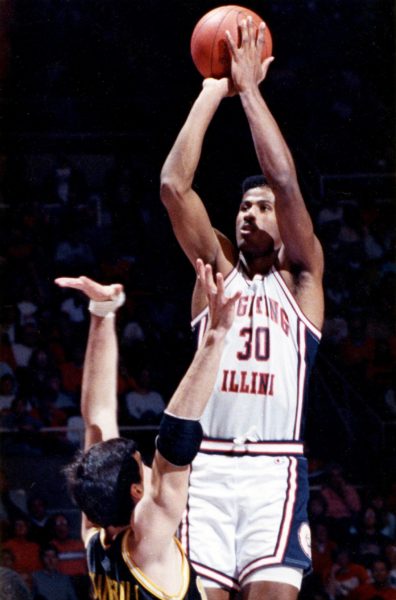 A former NBA player is returning to a familiar bench.

Marcus Liberty, who played for the Denver Nuggets and Detroit Pistons during his four-year NBA career, will coach the Out-of-Door Academy girls basketball team this season.

Liberty coached the Thunder boys basketball team for five years from 2013 to ’18.

“Coach Liberty is a well-known and beloved coach in our community,” Thunder director of athletics Kippie Crouch said. “He was excellent in leading the boys program and we are excited to have him bring his passion and enthusiasm for basketball to our girls program.”

“ODA already knew me,” Liberty said. “I told them I would help out the men’s program, too, if they wanted me to. I’m all in when I do stuff. They know what they are getting from me: They are getting a basketball junkie.”

All seven varsity players from the 2019-20 squad that finished 7-11 under Paige Thevenin will return this season, giving Liberty a veteran varsity squad.

“What you have now is solid,” Liberty said. “I’m not saying you are going to win the national championship, but you’ve got some girls who want to play college ball.

“I love working with girls. The girls listen and they take their time. With the girls you can implement something nice and get a good system in. Girls can compete, especially if you have some athletic girls, and we’ve got some good athletic girls.”

Liberty is waiting for the green light to get together and begin working with his new team.

“I’m excited,” said Liberty, who coaches a pair of teams in his Liberty Edge travel ball organization. “I’m ready to get this ball rollin’.”

In his spare time during the coronavirus COVID-19 pandemic, Liberty has done Facebook live interviews on his All Ball Chicago podcast with the likes of former and current NBA players such as Terry Porter, Jabari Parker and Kendrick Nunn.

“I am looking forward to an awesome season,” Liberty said. “Basketball fundamentals and learning the game are important aspects of the game. Understanding how to play makes basketball fun. We will have fun. We will push each other.

“We will hold each other accountable on and off the court. We will get better at each practice and we will compete. I am so excited about the opportunity to work with each player on the team.”

The 51-year-old Liberty led King College Prep High School to an Illinois High School Association (IHSA) state championship in 1986 and a runner-up finish in 1987. In the ’87 season, the 6-foot-8 Liberty scored 41, 23, 38 and 41 points in consecutive games. His 143 points during that tournament stands as a class AA record in the state of Illinois. In 1987, he was named a McDonald’s All-American, along with being named Parade Player of the Year.

At the University of Illinois, Liberty was on the 1989 team with Nick Anderson, Kendall Gill and Kenny Battle that reached the Final 4.